Skip to content
Home » Blog » Alexander Hamilton: The Man, The Musical, The Microfilm

Alexander Hamilton: The Man, The Musical, The Microfilm 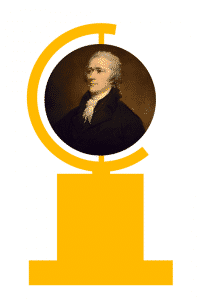 This Sunday, the 72nd Annual Tony Awards will recognize achievement in Broadway productions during the past season. Although it’s been two years since “Hamilton: An American Musical” stormed the stage, winning 11 of its 16 nominations, the musical continues to dominate live theatre across the world and bring attention to one of America’s well-known adopted sons and most colorful historic figures, Alexander Hamilton.

This gives us the perfect chance to promote interest in the digitization and online accessibility of the Library of Congress’ Alexander Hamilton Papers collection.

Born in the British West Indies, Hamilton came to New York as a teenager. In his short 49 years, he was a son, an orphan, a friend, a lawyer, a revolutionary, George Washington’s aide-de-camp, a husband, a father, a member of the Continental Congress, co-author of the Federalist Papers, the first Secretary of the Treasury, an adulterer, inspector general of the U.S. army and, ultimately, the unfortunate soul on the wrong end of a duel with then-Vice President Aaron Burr. “Colorful” may be an understatement.

Despite the personal and political scandals that pepper his biography, Hamilton’s input and influence in the founding years of this country was impassioned, intelligent and had lasting effect, ensuring his place in American history.

200 years after his death, Hamilton once again became a commanding figure on the American scene as his life was played out in literature, music, rap and dance. Winner of a best musical Tony award, “Hamilton: An American Musical” was inspired by the 2004 biography “Alexander Hamilton” by historian Ron Chernow. On Broadway alone, the musical has been seen by more than 1.6 million theater-goers since its July 2015 debut and grossed nearly $368 million. The number of books sold is also well into the millions.

In the Spring of 2017, Crowley Imaging was awarded a contract from the Library of Congress for microfilm scanning and cropping services of the Alexander Hamilton Papers. In all, 192,058 images, spanning the dates of 1708 through 1917, were scanned and cropped to exact specifications, leaving a small margin around each image to ensure full capture.

Crowley scan operators utilized the Mekel Technology MACH-Series microfilm scanners for their ability to quickly and accurately capture images from all types and sizes of microfilm regardless of film condition. Utilizing Quantum software for film scanning and processing, the images were scanned at 200 and 300 dpi for online posting. Library of Congress technicians added metadata to the files. A portion of the digitized collection went live in August 2017.

The collection is arranged in nine series:

Take a minute to poke around the collection. Click on an image, zoom in and enter the mind of Alexander Hamilton as family man, lawyer and politician. It’s easy to get hooked and you may find those minutes turning to hours…and you might just be humming as you read.

Learn more about the digitizing capabilities of Crowley Imaging