Patron Scanners and Preservation – Part One 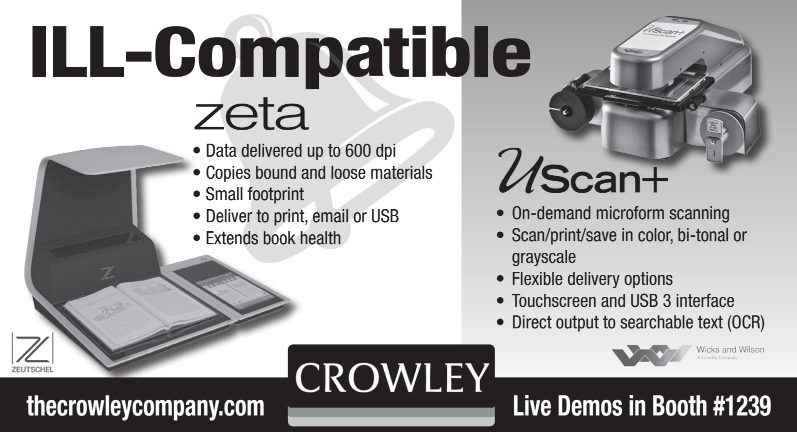 As we head to Philadelphia for the annual ALA Mid-Winter Conference and Expo, it’s a great time to reflect on how libraries are enhancing their relevance and expanding their reach by embracing today’s technology. As a library vendor, we see two distinct trends taking place: the increase in patron (sometimes called “walk-up” or “on-demand”) systems found on the library floor and the growth of digital archives found online. In Part One of this blog series, we’ll examine patron scanners.

Back in the day (and it’s really not that far back as I interviewed two 2013 college grads who confirm that their experience was the same as mine from, um, a long time ago), libraries were known for books, shushing librarians and manual microfilm readers. Most of us can relate to those really awful paper copies when gathering research – the blackened edges with the squiggly print at the gutter – and more than a few of us might admit to breaking a binding or two as we squeezed the top of the copier tight to get a better image. And let’s not discuss paper jams and the frequency of “out of order” signs.

Today, libraries – while still known for books (thank goodness!) and shushing librarians (a necessity, let’s face it) – are becoming community centers that offer meeting rooms, educational sessions and technology that many don’t have in-house and that make saving and sharing information a cinch. Academic libraries seem to be the first making the switch to higher technology as the generation of their patrons demand it and tuitions help subsidize the budgets. Private and public libraries are not far behind as today’s technology becomes more affordable. Two of the most popular systems Crowley has seen take off in the past year are the Zeutschel zeta book copy system and the UScan Universal Film scanner.

The zeta, called a book copy system, is really a scanner that replaces the traditional paper copier and takes up a much smaller footprint (32”x25”). A book is laid open on the base or cradle (cradles come in varying styles and degrees) and the image is captured via a planetary camera system. No more worrying about “the smudge,” no more damage to the bindings and no more misalignment thanks to Zeutschel’s patented Perfect Book software. The zeta works with loose documents, three-ring and spiral binders and any other type of loose or bound materials up to 14”x19”. Important to many librarians and patrons, the unit is ILL-compatible, which allows for lending of documents between libraries.

Operation is extremely simple: a patron walks up, places the material and uses a touchscreen pad to make a digital copy which can then be printed in the traditional manner or saved to USB, the internet, GoogleDocs or any configuration that the library allows. Watch the video.

Also ILL-compatible, the UScan+, the latest generation of the UF-Series, is a replacement to aging reader-printers. It’s the only unit with USB 3.0 interface on the market today. If you’re old(er), you might remember checking out a roll of film, taking it to a carrel in a darkened area of the library, threading your film onto a spool hooked to a machine with a large screen and manually scrolling through pages of film to find what you were looking for. Fiche or aperture cards required additional equipment. No more!

The UScan+ allows patrons to review images from any microform – microfilm, microfiche, aperture cards, photo negatives and more. Once the media is inserted either onto spools or into a platen, the scanner is operated via a tile interface similar to what is found on today’s tablets. Patrons can use either touchscreen or a mouse to quickly scroll through the images and save as many as they want to a shopping cart. An OCR option, if purchased, can make searching a roll of film or a jacket of fiche incredibly fast and efficient. Upon review of images in the cart, which can be edited or deleted onscreen, the images can be saved to USB, the internet, DVD, emailed or several other output options. Here’s a short video of the UScan in action.

The return on investment with patron units can be immediate and considerable. In addition to saving money on book repair/replacement, libraries are finding that most patrons save to USB which reduces paper and toner costs significantly. Maintenance of both units is minimal as is the number of consumable parts. Both units can be fitted with a pay-per-use system (accommodating most major brands) that further allows libraries to quickly recoup the cost of the unit. From the patron standpoint, that which was once an arduous and time-consuming task, now takes a fraction of the time and information is easy to transfer to varying formats.

For the reasons above – customer service, technology and economy – patron scanners are rapidly becoming library staples.

Next week’s blog will discuss the preservation side of library digitization efforts.

Going to ALA MidWinter or Interested in a Patron System?

If you’re heading to the ALA show or are in the Philadelphia area, here’s a link to a free expo pass. If you can’t be at the show, but would like a demo of either the UScan+ or the zeta or any of Crowley’s other patron systems, contact us at (240) 215-0224 or comment below.