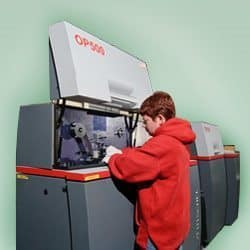 We asked a few questions, did a little research and found that the request was part of an international scavenger hunt that raises awareness for charity: GISHWHES (aka the Greatest International Scavenger Hunt the World Has Even Seen).  It is, in fact, #157 out of a list of 185 lunatic, endearing, challenging, creative and charitable acts teams must accomplish.

#157 Get photos of each of your team members printed on microfilm.

Writing an image to microfilm is not as simple as it sounds, as many of the teams have no doubt found. It entails submitting digitized images into an archive writer which creates the images on microfilm. The film is then processed in an archive processor. Finally, the processed film is manually tested for image density and image quality. There is typically a minimum fee associated with the task, but for GISHWHES participants from the U.S., Crowley has reduced the fee by 75%.

We give the hunt creators credit for coming up with #157. Someone had to know their micrographics to even think it up. We can only guess there’s a librarian to thank.

Created and run by Supernatural star Misha Collins, the hunt has broken several Guinness World Records and, in 2013, had 14,580 participants in 972 teams from 90 countries. Since 2011, the event has taken place the first week in August. With the following invitation on the GISHWHES homepage, who wouldn’t be tempted to join?

According to an interview Collins gave to Guinness World Records, the event is tied to his charity, Random Acts, of which he is founder and board president. The organization’s mission is to “to conquer the world one random act of kindness at a time.”

Many of the items on this year’s list are obvious statements to the mission, such as #58 (sign up – and make the commitment – to donate bone marrow), #78 (visit an orphanage, children’s hospital or a juvenile detention center and distribute cookies dressed as Cookie Monster) and #85 (ask a senior citizen for their bucket list and make a video while achieving one item). 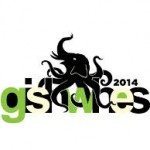 Others – like #81 (erect a tribute to Horris Packard, the inventor of Rubber Gloves), #89 (create an Oscar-worthy love scene between William Shatner and Larry King using creative editing of existing footage) and #100 (provide visual evidence that unicorns really do fart rainbows. No photoshopping!) – challenge the creativity, skills and partnerships (and no doubt the sensibilities) of those participating.

A full read of the list leads makes me think this is probably a vacation week for many of the participants as it would be nearly impossible to complete the items even with a team of 15 while working. There are significant expenditures involved, although they are optional. Overall, the race strikes me as fun, enlightening, taxing, exhausting and ultimately fulfilling. The testimonials are inspiring.

And why, beside the greater good, would one participate? The grand prize. As stated on the GISHWHES website, “The 2014 Winning Team will be flown to ‘King’s Landing’ in Croatia where they will set sail on a pirate ship captained by Misha Collins and be treated to a survivor-style weekend adventure of revelry, mayhem and wondermentation.”

That and make the world a better place? I’m putting in for the first week of August next year. And if there’s a microfilm challenge again, I’ve got it covered.

From micrographics equipment and microfilm to desktop scanners to production scanners to patron systems and conversion services, The Crowley Company has aided archivists, librarians, students, records managers and others with archival preservation and digitization. If you’re interested in writing images to microfilm or any other imaging solution, please contact us at (240) 215-0224.

Cheri Baker, Crowley’s Director of Communications, has a career that spans media, agencies and corporate communications. She’s a self-described “generalist specialist” and believes common sense, good grammar, nice manners and a bit of fun make for successful marketing, communications and public relations (or for that matter, a successful anything). Find Cheri Baker on Google+