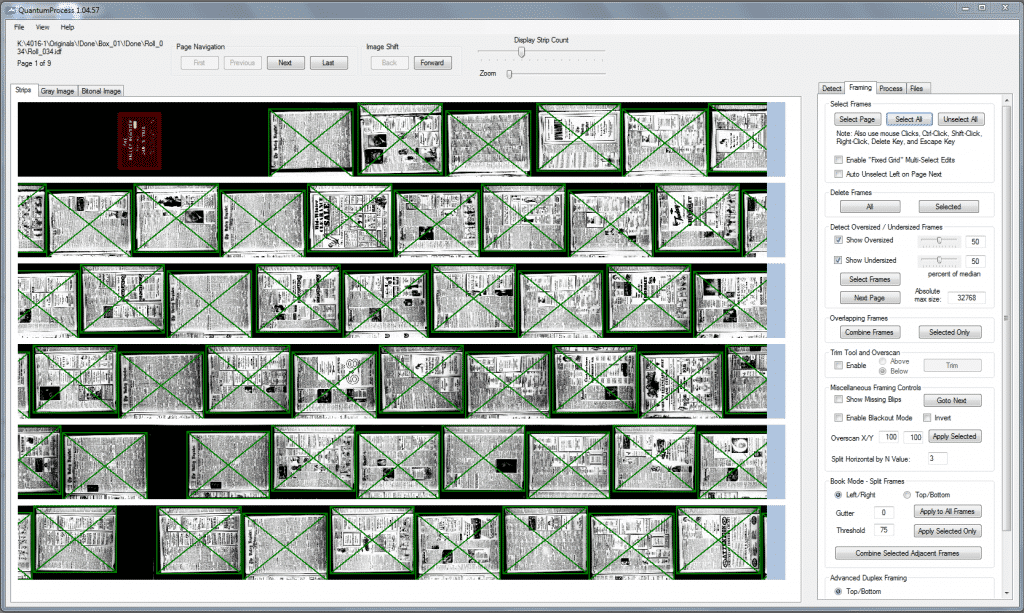 Last week we received the kind of email every business wants to receive: a glowing review, a good tip and an idea for further engagement – the trifecta of customer response. A State Archivist wrote:

“After framing the first fiche…in QuantumProcess, I used “Progogate this page” and since they [the images] were all shot the same, it took very minor tweaking to get the rest perfect. These machines are more flexible than I ever imagined. Is there an official forum for “Meklers” to discuss discoveries? Every day I find some new way of doing the job while cutting down the time without affecting quality. You have designed a great machine and some outstanding software. Thank you for everything.”

The equipment the archivist describes using is a Mekel Technology MACH7 microfiche scanner, which is engineered to digitize large volumes of microfiche of all types (standard/long jackets; COM; AB Dick; Ultra Fiche and Microx). Manufactured by The Crowley Company at our plant in San Dimas, Ca., the Mekel microfiche scanners are powered by custom  QuantumScan and QuantumProcess software (known collectively as Quantum). Mekel’s Quantum software has been earning rave reviews since its development five years ago for its ease of use, increased operator production, reduced microform scanning costs, optimum image quality and 100% image capture guarantee.

As little as two decades ago, the world did not have the ability to digitze and electronically share the billions of images stored on microfilm and microfiche.  The M-series (now known as the MACH-series) microfiche and microfilm scanners were the world’s first digital capture units for microform. The Mekel microfilm scanner was introduced in 1989 and the microfiche scanner debuted two years later (read more). While the casing of the scanners hasn’t altered significantly in 20+ years, the software and mechanics certainly have.

Formerly run by the efficient FastFiche (FastFilm for the Mekel microfilm roll film scanners), Quantum first hit the market in 2009. Its R&D was a result of changing technology and the need to scan older film in increasingly poor condition. Pat Crowley, chief of Crowley Imaging, Crowley’s service bureau, notes that “As the idea of digitization proved its worth and gained ground through the years, the quantities of microfilm being brought to us for digitization increased and the quality – in many cases – decreased. As we were already working with some of the world’s most respected archival institutions, we had the perfect testing ground of high-volume scanning, media in varying states and ultra-stringent image requirements. Quantum software was developed by the client for the client…and, in this case, we were the client.”

Thanks to Quantum software and its capabilities, the email we received last week is not unusual feedback. Here’s one received shortly after the Quantum release from a Southeast service bureau Operations Manager:

“Having just replaced a different brand microfilm scanner with a Mekel MACH5, I’m most impressed with the attention we’ve received in making us comfortable with the product…Our operator…is  making QuantumScan and QuantumProcess sing.”

Each Crowley hardware representative agrees that showing prospects the versatility of QuantumScan and QuantumProcess usually seals the deal. “From batch processing to easy workflow integration,” says West Coast rep Ed Berkowitz, “prospects are always impressed with the simplicity of the scanning operation and amazed at the degree of control they can have over individual images, even when strip scanning. In many cases, I’m able to show how one of our scanners can replace two to three others when using Quantum.”

We’re working on the idea of a forum for “Meklers.” In the meantime, our sales and technical support staff will do their best to make sure that Quantum “sings” for every Mekel Technology scan operator.

If you have any questions about the capabilities of Quantum software or Crowley’s production-volume Mekel Technology roll film and microfiche scanners, please contact The Crowley Company by calling (240) 215-0224. General inquiries can be emailed to [email protected]. You can also follow The Crowley Company on Facebook, Twitter, Google+, LinkedIn, Pinterest, and YouTube.

Cheri Baker, Crowley’s Director of Communications, has a career that spans media, agencies and corporate communications. She’s a self-described “generalist specialist” and believes common sense, good grammar, nice manners and a bit of fun make for successful marketing, communications and public relations (or for that matter, a successful anything). Find Cheri Baker on Google+