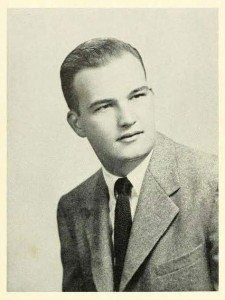 The upcoming Father’s Day weekend seemed like a good reason to find out more about Jerry Crowley, the founder of Crowley Micrographics (now The Crowley Company). I spent a few minutes with his middle sons, Christopher and Pat, and heard stories amusing, pragmatic and wildly politically incorrect. All of which I found intriguing (and only some of which you’ll read about).

“My Dad was what you would call honest to a fault,” says Christopher, now company president. “He gave honesty and he expected honesty…and if he didn’t get it, you were called out in a hurry.” While his forthrightness sometimes cost the company business, in the long run it paid off as Jerry and his firm gained a reputation for delivering on promises made.

Says Rich Jackson, a long-time Crowley hardware representative, “I didn’t know Mr. Crowley personally but I knew of him when I first started out in the industry. He was well-known as an insightful entrepreneur who was willing to take on projects that would expand business. If anyone needed micrographic equipment or expertise, we all knew to call Jerry Crowley.”

Born in 1929 in Washington, D.C., Jerome F. Crowley, Jr. graduated as a Sociology major from Haverford College (Pa.) with the Class of 1952. His college career was interrupted by a stint in the U.S. Marines. In part, his Haverford yearbook entry reads, “Kindly old Jerry, Tenth Entry’s top scholar and erstwhile footballer, returns to the Marines this summer a sergeant. The recruits under him will no doubt receive the most un-Marine-like training imaginable and, all in all, will be the luckiest men in the Corps.”

Shortly after graduation and his subsequent retirement from the military, Jerry married sweetheart Joan and began building his family of four while also embarking on a successful career as a manufacturer’s representative in the micrographic industry. In 1980, he started his own firm, J.F. Crowley, Inc., earned a spot on the GSA schedule for hardware and supplies and sold equipment and microfilm to the government.

Recalls friend and fellow industry icon Jim Modrall, vice president/technical services of BMI Imaging, “Jerry always had what can best be characterized as a ‘stern’ expression that belied his true personality. He had a quick wit, a dry delivery…and was someone that you just enjoyed being with.  I clearly was not alone in my affection for Jerry as he was one of the best-known and widely-liked people in the micrographics industry.” He continues, “Jerry was so successful as a salesman that every equipment manufacturer wanted him to sell their products and every competing sales agency was afraid to sell against him because the customers just liked dealing with Jerry.”

As the company (and size of the equipment) grew, Jerry left his home office and leased a showroom for his micrographic cameras, duplicators and processors. Joining him as a sales representative in 1982 shortly after graduation from the University of South Carolina, Christopher was tossed into the deep end. “I learned by the seat of my pants,” he remembers. “There was no formal training program and no hand-holding. You worked. You delivered. You moved on to the next project. There was not a grand vision of what the future would be like. We worked day-to-day and made a go of it.”

The move toward scanning and digitization was a tough transition for the elder Crowley. Says Christopher, “I wanted to bid a project with the U.S. Postal service for the scanning of aperture cards. If we secured it – which we did – it would require the purchase of a $100,000 piece of equipment. That was a lot of money back then and we had a very heated discussion about bidding the job and buying the equipment.” When asked how he won the argument, Christopher shrugs and laughs, “He usually let us win.” And there’s the softer side.

Pat, today’s vice president and director of Crowley Imaging, also remembers the showroom.  That’s because he – and several of his high school buddies – were Crowley’s first service bureau operators. “At one point, my Dad decided that rather than just have the equipment sitting around for demonstration, they should be working. Our first job was somewhere around 1988 microfilming all of the building plans and permits for Montgomery County (Md.). I remember operating the microfilm camera at the showroom and then processing the film in our basement. Not particularly efficient, but it worked, we got our start, and I became intrigued with the imaging side of the business and never left it.”

Pat also recalls the $100,000 Photomatrix aperture card scanner that was purchased to process the U.S. Postal project. “My Dad was very proud of that machine, although he wasn’t particularly technical. He would take a prospect to the machine, hold up a stack of aperture cards in his left hand and say ‘You put the cards in here, the machine goes bzzt, bzzt, and then you collect them here’ while transferring the cards to his right hand. After that, he’d tell the client that Chris or I would be happy to discuss the details with him.” Chris remembers this well, but is not sure if it’s because his Dad wasn’t technical or just was ready to move on after three minutes. “He was always moving on to the next thing.”

When asked how Jerry, who passed away in 1996, would view the industry and the company today, each son has an answer.  “He would have been disappointed in the demise of micrographics,” says Christopher. “But he would have liked to see how we’ve grown and diversified, while still keeping our micrographics core,” finishes Pat.

Perhaps more, he would be both pleased and proud that there is still a bit of that “no BS” mentality and that honesty remains a core value. Jim Modrall concurs, “One of the traits that impressed me the most about Jerry was his desire to always be fair and do the right thing in every situation, even if it wasn’t financially advantageous.  Jerry clearly instilled this ethos in both Chris and Pat as it is still evident in their dealings to this day and is arguably the single biggest factor in continuing success of the Crowley Companies.”

As legacies go, you can’t ask for more than that.

POSTSCRIPT: In one of those “small world” moments, last month Haverford College purchased a zeta book copy system from The Crowley Company, unaware of the connection. When it was pointed out, the college was quick to send us Jerry’s yearbook page (see link above).

The Crowley Company provides is a full-solution imaging partner. From micrographics equipment and microfilm to desktop scanners to production scanners to patron systems and conversion services, The Crowley Company has aided archivists, librarians, students, records managers and others throughout the world with archival preservation and digitization.

If you have any questions, please contact the Crowley Company by calling (240) 215-0224. General comments and inquiries can be emailed to blog@thecrowleycompany.com.

Crowley’s Director of Communications, Cheri Baker has a career that spans the realms of agency and corporate communications. She’s a self-described “generalist specialist” and believes common sense, good grammar, nice manners and a bit of fun make for successful marketing, communications and public relations (or for that matter, a successful anything). Find Cheri Baker on Google+