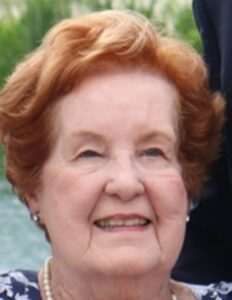 When I first met “Mrs. Crowley” (it took me a while to call her Joan, although she insisted from our very first meeting), it felt a bit as I imagine it would feel to meet the Queen. In many respects, she truly was queen of The Crowley Company. Supporting her entrepreneur husband, Jerry and, following his passing, her sons Chris (now deceased), Pat and Kevin, Joan Crowley was family royalty in every way and was a regular Crowley Company presence every Thursday without fail.

From her perfectly creased trousers, stylishly embroidered shoes and crisp white collars to her perfectly coiffed red hair and – depending on what she was wearing – blue or green eyes that missed nothing, her five-foot-and-a-little-something frame was held straight by perfect posture, making her seem far taller than her actual height.

Joan’s formal role at the company was that of early receptionist and, later, professional shopper, making weekly Sam’s Club and Staples runs for office and kitchen supplies. In truth, she came to work so that she could have lunch with “her boys,” as she called them, and a quick smoke with longtime employees turned longtime friends.

Mrs. Crowley, as she’ll always be to me, passed away on December 31st, leaving behind her two sons, her daughter, Joanie, and eleven grandchildren, all of whom she publicly adored. This Saturday, March 19th would have marked Joan’s 25th anniversary on the Crowley payroll, but that belies the 15-plus years prior in which she held things together at home as the family-owned company grew from a den in Potomac, Maryland to three locations worldwide.

From Joanie’s endearing testimonial at the crowded funeral, I learned why Joan was always so nattily dressed; while in her teens, she worked for Garfinckel’s and became one of their youngest buyers at 21. She also spent decades working at Talbots. I learned how she worked hard to keep and grow lifelong friendships. I learned how she truly engaged with her grandchildren to be a relevant presence in their lives.

Still, I was curious about the role she must have played in the formation of – and continuation of – The Crowley Company while working, raising four children, being active in her church and community and (according to a few stories from credible sources) enjoying life to the fullest. Hint: she did not cook.

I asked Pat, Crowley’s president, and Kevin, Crowley’s COO, if they would answer a few questions about their mom and the company. The following are a few nuggets that help to build the big picture that was Mrs. Joan Crowley.

Thursdays are no longer the same at The Crowley Company, just as every day is a little bit different for Kevin, Pat and Joanie who each got a check-up call from Joan every night until the nights they spent at her bedside. Her legacy is one of hard work, faith, smart dressing and unconditional love for her family, her friends and the company she helped to build.

I end with one last hail to our unofficial queen, Joan Beringer Crowley. Rest easy; your legacy continues.