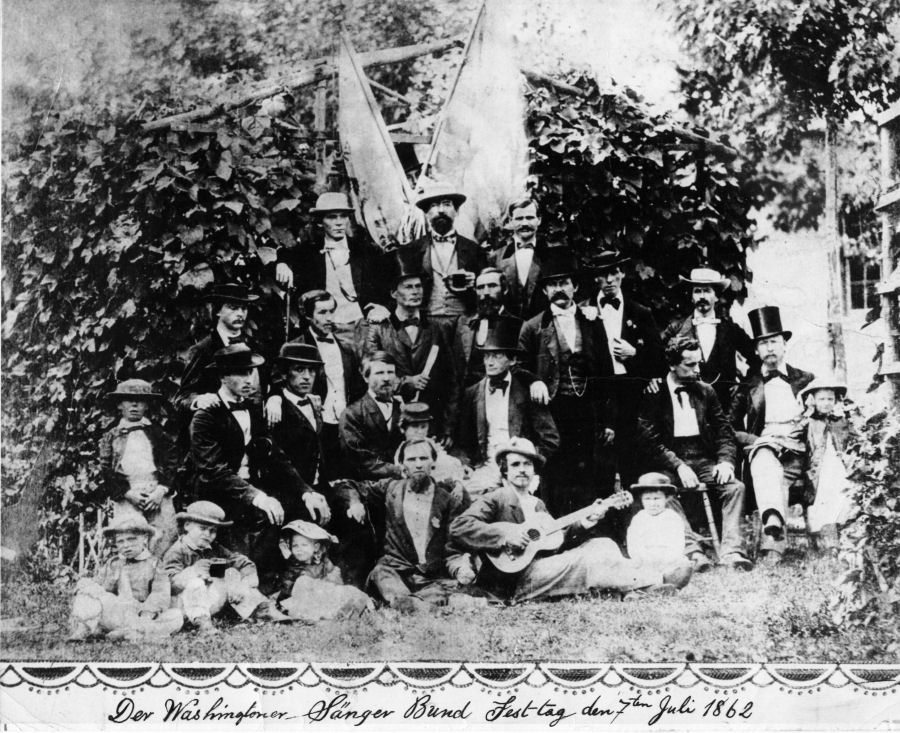 Crowley Imaging has had the opportunity to work with many remarkable organizations over its 30+ years in business. Not many of those, however, can boast award-winning singing talent. This past summer, we were able to preserve German culture and heritage by working with the Washington Saengerbund to digitize some of their historic records.

History of the Saengerbund

The Washington Saengerbund [1] is “the oldest German singing society in the Washington [D.C.] area.” Founded in 1851 by a group of young German-American church choir members, their original intent was to perform in a local song festival. Although they missed that first festival because the director didn’t believe that they were quite ready – a first glimpse into their dedication to excellence – they did go on to perform in many subsequent festivals. They brought home their first grand-prize trophy, a grand piano, in 1869. The German singing society originated as a male-only group but expanded to include women in 1967.

According to their website, the Washington Saengerbund of today continues its long tradition of preserving German music and culture in the metropolitan area with numerous concerts and performances throughout the year, singing songs in German. In addition, the Saengerbund sponsors social activities, brings authentic German flavor to local Oktoberfests and plays host to visiting choruses from Germany.

Saengerbund members Al Wenzel, group archivist and webmaster, and his wife Renate, group librarian and board member, worked with Crowley Imaging specialist Meghan Wyatt on this digitization project. Al and Renate have been members of the choir for over four decades. As Al explains, “We moved from Germany in the early 1960s. We met a German-speaking member of the chorus at one of our children’s schools, who invited us to come to rehearsals. We liked the group and continued.” Al sings bass; Renate sings alto. “I had heard about The Crowley Company from Prospect Hill Cemetery, which had also had historic records scanned” says Al. “As some of our historical records have already been lost, we wanted to make certain that what we still had was going to be preserved.”

The collection consisted of seven bound books containing handwritten meeting minutes ranging from 1888 to 2007. Those from years leading up to August 1941 were written in German, after which they were in English. Two of the books were from affiliated singing societies.

The scanning was performed on a German-engineered Zeutschel OS 12000 A2 overhead book scanner. On these models, the adjustable book cradle ensures that no damage is done to the binding. The planetary camera system utilizes LED lighting with no UV radiation to protect the original material. When scanning, Crowley Imaging operators allowed for a very slight border to ensure that no data was missed. The pages were scanned to 300dpi color TIFF images and also saved as multipage searchable PDF files (one PDF per book, named by the date range found on the cover). The result was a total of 2,400 images which were delivered along with the PDFs to the Washington Saengerbund via hard drive.

For now, the digitized meeting minutes will be used solely for preservation and providing enhanced access for in-house researchers. Al recalls, “We published a book in the 1970s about the Saengerbund’s first 125 years. Then, researchers did not have the luxury of using online records and/or databases. Now, one can read the old minute books without taking them out of the archives.”

As group archivist, Al uses the images in his own research. “I have been researching old newspaper stories to fill in holes in our missing records” he says. “I often try to confirm happenings by reading the minutes, since I am able to read the old German script. Before digitization, the minutes were not always readily available because they were stored in our club archives. Now, I can refer to the PDFs at home to read those minutes at my leisure, going back and forth without turning the fragile paper pages. I can also zoom in on the PDFs, which is very helpful when the writing is not quite clear.”

The digital images have enabled Al and other researchers to discover some interesting historical facts about the Saengerbund. For instance, Al says, “Our group has outlived the Civil War, WWI and WWII. WWII happens to be a time that I recall as a young boy and I was curious to find out what happened to the Saengerbund during those years. The minutes told me that the chorus went into hiatus in 1942 but started up again soon after the war ended.”

What does the future hold for these digitized records? Al shares, “Translation would be desirable, but is too big of a job at this time. The scanned records are not available on the website…yet.”

Editor’s note: The aspiring linguist in me found this interesting – Saengerbund, alternatively spelled Sängerbund, derives from the German words for singer and club. So the name Washington Saengerbund literally means “singing club.”

With a bachelor’s degree in Mass Communication from Towson University, Camily Bishop serves as The Crowley Company’s sales and marketing assistant. A self-proclaimed member of the grammar police and avid reader of classical fiction, you can find her curled up with a good e-book or, on a nice day, experiencing the great outdoors – perhaps at the nearest wine festival.